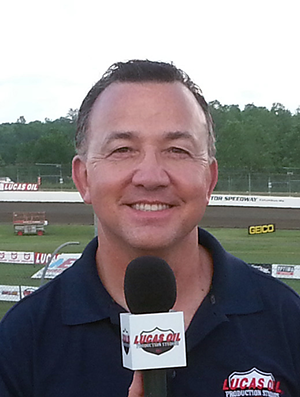 The road back to the beginning is long for Dave Argabright, one of the most prolific and influential motorsports media figures of his generation. His career spans more than 40 years with a collective body of work that includes 17 books, over 1,600 published columns and feature stories, and nearly 500 network television broadcasts. His aggregate writing production is estimated at 4.5 million words.

Argabright was born in Anderson, Indiana and at age three his family moved to rural Madison County, near Perkinsville. He graduated Frankton High School in 1973 and did not attend college. His early jobs included truck driver, factory worker, life insurance agent, and car hop at a local drive-in. While selling insurance, a chance meeting in 1980 with the sports editor of the Anderson Herald led to Argabright being recruited as a part-time stringer, covering local sports. The late-night newsroom experience opened an exciting new door, exposing Argabright to the concept of deadline reporting and the craft of writing. The $15 he was paid for each story also supplemented the wages of a struggling insurance agent. In early 1983 Argabright began writing a weekly newspaper column, Track Talk, which he continued until 1987.

The launch of OPEN WHEEL Magazine in 1981 would have a significant impact on the scope and direction of Argabright’s career. Enamored with the new magazine, Argabright submitted two feature stories to editor Dick Berggren and asked for honest feedback. The manuscripts were quickly returned, covered with red ink. After several days of feeling sorry for himself, Argabright retrieved the manuscripts from the trash and took Berggren’s feedback to heart, promising himself that if he couldn’t learn to write a story Berggren would approve of he’d give up the idea of becoming a writer. Argabright tried again with a feature story on Illinois racer Chuck Amati, and the story appeared in the February 1983 issue of OPEN WHEEL. Argabright’s national presence was off and running. Argabright was soon a regular contributor to OPEN WHEEL and the magazine’s eventual replacement, SprintCar and Midget Magazine, a position he continues to this day. In 1988 Argabright further enhanced his national following when he began writing an ongoing column in National Speed Sport News.

In 1999 Argabright teamed with Brad Doty to write Doty’s autobiography, Still Wide Open. Doty was a popular World of Outlaws sprint car driver who saw his career end prematurely with a spinal injury suffered in a racing crash, and the combination of his powerful story and Argabright’s ability to merge the story into a moving narrative resulted in a book that was both touching and enduring. Still Wide Open book became an instant classic within the racing community and Argabright’s standing as an author was assured.

Lone Wolf was a particularly impactful effort and one of the most compelling stories in motorsports. Doug Wolfgang was a legendary sprint car driver who suffered devastating injuries in a fiery crash in 1992, effectively ending his racing career. Several years later Wolfgang was involved in litigation surrounding the circumstances of the crash, causing controversy and a fierce division within the sport. Knowing that his perspective had not been told, Wolfgang turned to Argabright to help bring the full story to the surface. The resulting book led to significant healing and closure within the sport and Lone Wolf continues to earn praise as one of the most powerful motorsports books ever published.

In 2005, at the urging of SprintCar and Midget Magazine editor Doug Auld, Argabright took his writing in an entirely new direction. A fictional series, The Best of Times, was launched as an experimental monthly serial, with the understanding that if reader enthusiasm failed to materialize the series would end within a few months. But feedback was immediate and overwhelmingly positive, and the exploits of fictional racer Jimmy Wilson became legendary. The series ran for a stunning 188 consecutive months before Argabright stepped away in December 2019, citing creative exhaustion. The immense tale spans nearly one million words and Jimmy Wilson will live forever in the minds of loyal fans of the series. Many episodes were adapted to book format and were published in a series of six books known as the Jimmy Wilson Collection.

Readers and critics through the years have praised Argabright’s engaging, heartfelt style of writing. His natural storytelling ability and knack of connecting emotionally with his audience has earned him a fervent and loyal following, now spanning three generations of motorsports fans. Recognition and awards have been numerous, and in 2014 Argabright was inducted into the National Sprint Car Hall of Fame.

Many television viewers recognize Argabright as a familiar face on racing telecasts. His broadcast work began in 1990, and over the following three-plus decades Argabright has appeared on MAVTV, CBS Sports, NBC Sports, ESPN, The Nashville Network (TNN), and SPEED, among other networks. Argabright also served as a pit reporter with the Indianapolis 500 Radio Network from 2004 to 2010.

In 2021 Argabright announced his decision to step away from full-time travel associated with his broadcast career. He stopped short of calling it a full retirement, as he continues his magazine writing and appeared in a handful of broadcasts in 2022. He continues work on several book projects that are not yet published.

Argabright’s life away from media work has revolved around his large and bustling family. He enjoys classic cars and since 2000 has owned and maintained a 1969 Chevrolet Camaro SS, a hands-on project since the beginning. He is a longtime fan of classic film and also enjoys music as well as studying World War II history. He and wife Lisa continue to reside in Central Indiana.