On Top Of The World 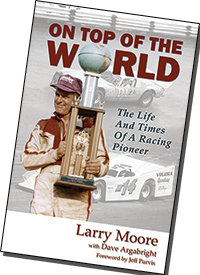 Across four decades Larry Moore was synonymous with winning, innovation, and larger-than-life personality. In this groundbreaking book Larry opens up to share the story of his fascinating life and career, and how the booming sport of dirt late model racing began.

You'll be surprised to learn of his humble beginnings, and you'll find an unusual frankness on these pages. Larry reaches deep inside himself to reveal a complex man who rose to stardom in a complex sport. This isn't just fun and games; Larry describes the lowest lows right along with the soaring highs.

Most of all, On Top Of The World will amaze you. It would be difficult to find anyone in racing who had a career quite like Larry Moore. On the dirt he was phenomenal, the first repeat winner of the World 100 and the first to win it three times. Today he is regarded as one of the greatest dirt drivers in history. Yet he was also an accomplished pavement racer, winning against the best in ARCA, ASA, and USAC. He also proved his mettle in USAC sprint car competition. That's part of what makes this story so notable: few racers have followed such a diverse path, and even fewer were as successful.

We might as well say it: Larry and the people of his era were not politically correct. The stories in this book make that perfectly clear. That's what makes Larry's story so memorable: he and the other great characters of his time left an enormous impression on those who saw them race.

On Top Of The World has something for everyone. Dirt late model fans will be fascinated by the story of how their sport took root. Fans of other types of racing will be amazed at the incredible variety of Larry's career. Most of all, readers of every type will find themselves mesmerized by the story of one of the greatest personalities in the history of short track racing.

This is one of the most entertaining books Dave Argabright has produced. Hilarious, tragic, outrageous, colorful, revealing...this is the story of a man who has truly stood...On Top Of The World.