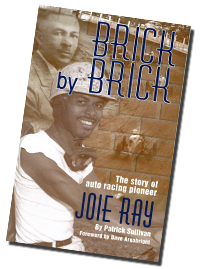 The story of a true American pioneer...

For many years Joie Ray's role as a groundbreaking auto racer in the 1940's and '50s was but a footnote to history. Now, Patrick Sullivan brings Joie's story to life in Brick by Brick, a warm, thoroughly readable offering. Sit back as Joie tells us of the dangerous--yet intriguing--days of racing's golden era, when Joie became the first African American driver to earn a professional license with AAA. Joie was a kind, gentle soul who steadily earned the respect of his peers, and he survived the tough, give-no-quarter racing world of the day.

As he tells Joie's story--with plenty of comments and stories from the man himself--Sullivan introduces us to the many characters and players who were prominent in the day. Travel the two-lane highways with MDTRA and IMCA, and meet unforgettable people such as Cliff and Florence Griffith, Chick and Dorothy Smith, Bobby and Betty Grim, Hector Honore, Virgil Graybeal, Spider Webb, Wild Bill Cantrell, Al Sweeney, Harry King, Frank Luptow, Troy Ruttman, and many more. This tale harkens back to another era, an innocent yet hauntingly dangerous time populated by characters of the highest order. When you're finished reading, you'll never forget Joie Ray, nor the world in which he made his mark.

Dozens of historic photos throughout