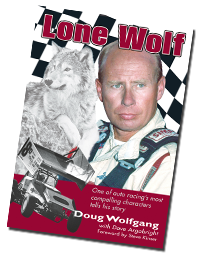 A must-read for fans of all types of auto racing. Doug Wolfgang rose from humble beginnings to become one of the most successful sprint car racers of all time. His smooth, fast style and his thoughtful, articulate observations of the world around him endeared him to legions of fans throughout the country. He reached the pinnacle of his sport by winning hundreds of races during his career, including five Knoxville Nationals triumphs. In April 1992 Wolfie was terribly burned in an accident at Kansas City, Kan., and fought through years of rehabilitation and dozens of surgeries to race again, mixed with a controversial lawsuit.

After years of reflection, Wolfie looks back on his life, his career, and the sport of auto racing. Speaking from the heart, this is Wolfie at his very best: Honest, insightful, funny, interesting, straightforward. Ride along with Bob Trostle, Doug and Joanne Howells, Bob Weikert, Danny Peace, and many more. Race alongside Steve Kinser, Sammy Swindell, Darryl Dawley, Keith Kauffman, and Lealand McSpadden. Listen to the cheers in Knoxville, and dodge the boos and beer cans from the people on Beer Hill at Williams Grove Speedway. Make the long ride from Skagit to Syracuse and all points in between.

This is a book you will never forget. Dave Argabright captures not just the words of Doug Wolfgang, but the deep emotions within the man.