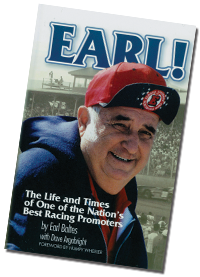 The story of one of America's greatest racing promoters...

These words well describe Earl Baltes, one of the most successful short-track promoters in American history. The “Earl of Eldora” tells the story of his life, his dreams, and his experiences.

It was a rough, tough, daring journey, and now you can ride along. With his colorful, straightforward style Earl tells of the many deals and promotions that changed the course of American motorsports. The people, the places, and the emotions you’ll never forget.

Read about his hilarious—and very brief—driving career, his involvement in other tracks, his hardscrabble youth during the Great Depression, his early success in the music business, and the intriguing story of how he happened across a parcel of ground near Rossburg, Ohio and turned it into Eldora Speedway, arguably the most beloved short track in the world.

Hang out after the races with the stars of the sport, sharing a beer and many memorable stories. “Earl!” is a one-of-a-kind book, about a one-of-a-kind character, and this is a must-read for race fans everywhere.