THE BEST OF TIMES…THE STORY BEHIND “THE STORY”

How did The Best of Times series come about? There really is a story behind the story.

Sometime in late 2004, I was on the phone with Sprint Car & Midget Magazine editor Doug Auld. Our phone conversations are typically long and wide-ranging, and this time the topic of writing fiction came up. I confessed to a long-harbored desire to try my hand at the genre, because I believe every writer should 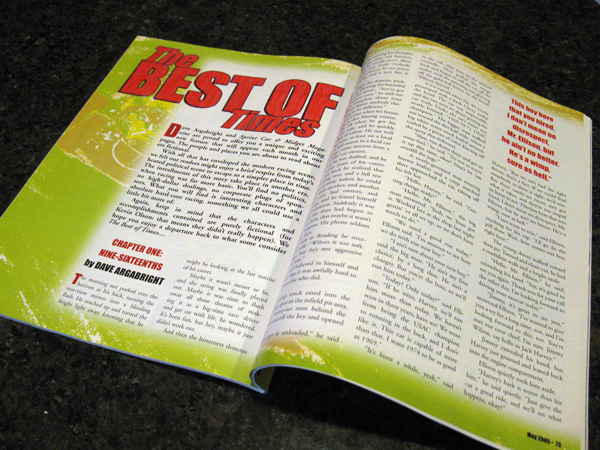 consistently try to expand his range and try new things. But new things are often intimidating, so I had never acted on my desire.

We reflected on an earlier era, when short fiction appeared regularly in mainstream magazines such as The Saturday Evening Post and Atlantic Monthly. “You know what would be neat?” I told Doug. “We ought to try a fictional racing series in Sprint Car & Midget. I wonder if our readers would be interested in something like that?”

Much to my surprise, Doug was open to the idea. What did we have to lose? After all, if it didn’t go over well, we could simply drop the idea and no harm done. We kicked the idea around a while and finished our conversation. The concept rattled around in my head for a few weeks, but nothing more was done.

When Doug and I talked on the phone a few weeks later, he brought up the idea again. “Have you written anything yet?” he asked. Now I was on the spot. My biggest excuse—not having an outlet for the material—had disappeared. All I had to do was write it, and Doug would publish it. I tried backpedaling and whining—“Well, I’m not sure I can…I’m awfully busy…how will I know if it’s any good?...” and the usual tripe. But Doug gently urged me to at least try it, because he was intrigued by how it would be received by our readers.

Finally, in early March I sat down at my computer to give it a try. In my mind, I had a clean sheet of paper. I had no characters, no setting, no plot…I wasn’t even sure what era the story would take place within. But inside me was a story, and all I needed was to learn how to let it out.

After many years of writing non-fiction, this was a completely different endeavor. I could write anything I wanted…but instead of a feeling of liberation, I was scared to death. What if it stinks? What if I fall on my face? And the greatest of all literary bugaboos, “Who am I to write this…what right do I have to consider myself a writer?”

I stared at the keyboard and began pressing the letters. Over the next several days, Jimmy Wilson was born. And Jack Harvey, and Slim, and Sonny Ellison. Steve Graffan, Sammy Caldwell, Al Petrov…soon I began to feel some structure, and it started to make sense to me.

On March 15, 2005 the first installment was finished. I sent it to Doug, and he began working in the layout. A name was settled on: The Best of Times, because that’s really what we were looking for. A visit back to another time, where nostalgia and retrospect always make things perhaps even more enjoyable than they really were.

I didn’t realize it at the time, but this series—like nearly all fiction—is about escapism. It isn’t real, even though it’s based on facts. Because it isn’t real, each of us can interpret things as we imagine them, and escape into the situations and characters in our own way. Many people feel that contemporary racing is a little too commercial, a little too refined, and not nearly as fun and colorful as it used to be. So our story became a pleasant little diversion back to another time and place where things were maybe a little more fun.

Good writing should inform, yes; but it should also entertain. And more than anything else, The Best of Times is about entertaining our readers.

Would the readers like it? My expectations were mixed; I felt some might enjoy the series, but I figured an equal number would be strongly opposed. After all, fiction in a racing magazine? The concept certainly is…well, different.

My only request of Doug is that we give the series one year to see if it might work or not. In fairness to those readers who enjoyed the story, we couldn’t very well run a couple of installments then leave them hanging. So the idea was to build an initial story of 12 monthly installments, with the final chapter closing out that story and that set of characters. If we decided to continue, I would start a completely new series to appear over the next 12 months.

I think it’s safe to say that Doug and I were both amazed at the initial response to the story. Yes, a few people grumbled. But the overwhelming majority of people were supportive and enthusiastic, and they were vocal in expressing it.

After 10 months or so, Doug reminded me that we were coming up on the “conclusion” to the first series. I told him that I planned on closing the book on Jimmy Wilson and crew with “chapter 12,” and was thinking of what the next series would look like. “I don’t think that’s a good idea,” Doug insisted. “I think people really like Jimmy Wilson…they don’t want him to go away.”

He was right, of course. And, frankly, I didn’t want him to go away, either. I had come to enjoy following him around, enjoying all the situations and problems he could get into.

So Jimmy and his “family” lived on. We’re now approaching six years of stories, so I guess Jimmy has at least shown some staying power. Am I surprised? Not really. I believe people today are looking for something unique, and the Best of Times is unique. It’s fun, it’s innocent, and I hope it’s entertaining.

Will it ever end? The readers will ultimately make that call. As long as they want it in the magazine, and as long as Doug consents, I think I’ll still want to write it. I’m grateful that between my writing and broadcast work I’ve got plenty to do, but writing about Jimmy is the most fun I have each month. I owe a great thanks to our readers, and for Doug Auld having faith in me, because Jimmy has become one of the most enjoyable elements of my writing career.

In late 2011 Sprint Car Salvation appeared, the first compilation book based on the series. the initial volumn was followed by Fast and Fearless, Sprint Car Showdown, and our most recent volume, Sprint Car Challenge. Each book encompasses a racing season as it appeared in the magazine. More books will follow as the series continues on.

Jimmy and his pals are more than a half-million words old now, but hopefully they’re still fresh and exciting. That’s the goal, and the challenge. I hope you’ll let me know how we’re doing.